Why so positive about the economic numbers? 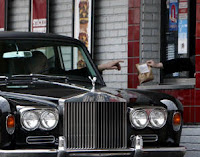 It seems that the optimists found good even with the economic numbers today. GDP was revised down in the first quarter by -6.4%. Much worse than the -5.5% posted before. The second quarter was down only 1% instead f the expected 1.5%. The thought is that there is momentum in GDP after a bad first quarter. However if you look a personal consumption we were down -1.2% over double what was expected. This is going to be the driver for a strong recovery. Chicago PMI was up sightly but not like some of the big moves in other countries. The NAPM Milwaukee was down below 50 to 45.

The numbers suggest that the US is in slow growth even with all of the stimulus. This is reflected in the relative performance of the US stock market against equities in other countries. US is a laggard versus emerging markets and similar to Europe for large cap stocks.

The dollar was weaker based on new risk taking. We continue to move back and forth between risk seeking and risk avoidance in currency trading.
Posted by Mark Rzepczynski at 5:42:00 PM No comments: Links to this post

Confidence around the world growing

The global confidence by country shows more clearly what we already know. The advanced economies are in a malaise. The only countries which are showing a flat rise in confidence are the United States, France and Germany. The only regions which are below average are the United Sates, Japan and Europe with the addition of some selected countries like Taiwan and South Korea who were affected by steep declines in exports. Most of Asia is positive and getting more optimistic.

No wonder the recovery is occurring in the developed world. This is still the place to be for longer-term currency plays.
Posted by Mark Rzepczynski at 12:30:00 PM No comments: Links to this post

NYMEX regulation - the CFTC should be concerned

I wrote an entry on the the CFTC yesterday questioning the comments of a CFC commissioner. Now I have to side with the regulators given the evidence that was presented on the "self-regulation" of traders by the NYMEX futures exchange. The NYMEX has the authority to set accountability levels for trading positions in the energy markets.
Accountability levels are based on reporting levels set by the exchange. These rules include hard caps on the number of contracts that can be held on the three days before expiration of a contract and accountability levels which if exceeded could lead to the exchange asking for a freeze or a reduction in positions. Given these rules, there would be the expectation that few traders would exceed the accountability standards. While not a hard cap, traders would be put on notice that the exchange was monitoring these positions closely. Monitoring is important and should be a requirement for ensuring a well functioning market. Of course, some would argue that this is an infringement on the freedom of traders but the exchange has a responsibility to see that the markets are fair and orderly and that means that no one person can have an excessive amount of the open interest in a contract. The issue is what is the number of contracts that would be excessive. NYMEX set the number of contracts at 10,000 in a single contract month.
The CFTC noted that 43 traders exceeded the limit of 10,000 contracts in a single month in the last year. The average amount that these traders exceeded the standard was substantial. This was not an issue of a few contract above the limit for a few days. What should we think of the exchange for allowing this excess over their levels and not taking any action clear action. The logic is questionable when everyone has been watching this issue closely since the spike in oil prices last year.
NYMEX argues that these were set conservatively because they were just accountability standards and that hard limits would be higher. This still begs the question of why have these accountability limits if they would not take any action to stop or review in detail the behavior of traders. Market participants clearly did not believe there would be any repercussions based on exceeding the accountability standards.

The result of lax accountability is what we are now seeing, a regulator who will now ask for control of this process. After focusing on the idea that the exchanges should be best able to regulate their activities, the exchanges blew their freedom and they should pay for the consequences.

The sad part of this saga is that the link between excesses in position sizes and price manipulation may not be able to be clearly made. Hard position limits are now being discussed at levels that would be much tighter then imagined just a few weeks ago. There is little evidence for anyone to tell what is the appropriate level of position limits and we may not be able to get to this key question in the current environment.
Posted by Mark Rzepczynski at 4:39:00 PM No comments: Links to this post

Richmond Fed manufacturing survey exploded on the upside. This move since the beginning of the year has been largest reversal since the introduction of the survey. There was nothing like it in the previous recession. At this rate, we will hit new highs in another month or two. This also beat the market expectations.

Now, this was not viewed as important as the Conference Board consumer confidence numbers which actually fell this month, but we believe this is something to watch closely. We are not looking for green shoots but there is clear evidence that businesses are getting more comfortable with the environment. The PMI surveys around the world are showing the same pattern. What is interesting about the Richmond survey is that it is a mix of shipments (33%), new orders(40%) and employment (27%).

This is not just a feel good survey. Combine this with the better Case Shiller numbers and we might say there is reason for more risk taking around the globe.

Posted by Mark Rzepczynski at 5:55:00 PM No comments: Links to this post

Am I going crazy or did I actually read the following comments from a CFTC commissioner?

The U.S. Commodity Futures Trading Commission will issue a “new and better report” next month bolstering the case for regulation of swaps dealer and index investors in markets it oversees, Commissioner Bart Chilton said today.

If the CFTC has the same data, how are they going to get a better report? There is no question that index players are more significant. They did not exist before. The issue is whether their activities caused distortion in price. This would suggests that contracts where they trade were pushed out of line with contracts not traded by index players. That evidence has not been apparent.

One of the regulatory objectives of the CFTC is to ensure there is not market manipulation. So where is the market manipulation caused form these players. It is not easy to find distortions and manipulation in the markets and clearly there have been cases in the past but most have been focused on what happens in the delivery month. The index players are usually out of the delivery month contract because of index rolls so the chance of manipulation near delivery is minimized.
The August report “will be better and we will not try to spin it and say speculators had no role, like we did last year,” Chilton said in an interview today on Bloomberg Television. Chilton said he can’t prejudge what the report will say.

So is he is saying that the report last year was not truthful? Of course, speculators have a role. You cannot imagine what price volatility would be like if there were only commercial users or hedgers. What happens if everyone wants to protect their exposures and short futures without any speculators. The price would fall excessively. This could not be sustained so there would be no futures market. The question is whether speculators create distortions. The report last year was referring to whether the speculators moved the market in ways that caused inefficiencies or welfare distortions.

But that analysis was based on "deeply flawed data," Bart Chilton, one of four CFTC commissioners, said in an interview Monday.

So what does it mean to say that the data is "deeply flawed"? The CFTC collects the data. If there is flawed data why have there not been proposals to right this data injustice? What new data is now available. One hopes that this new data is available for others to analyze.

Chilton said today the agency hasn’t already decided to put position limits in place. The agency will “strike the right balance to make sure that markets operate efficiently and avoid fraud or abuse,” he said.

Chilton, who dissented from the commission’s report last year, said today that “many will have a greater degree of confidence” in the new report.

Who are these many? The ones who want more regulation? Where was the outcry from academics and statisticians on the last report?

“If we have it my way, we will not go slow” and will “have something by the end of the year,” Chilton said.

Does this sound like the comments of a man who has an open mind? If there is new evidence that draws new conclusions, I look forward to reading about it, but it is appropriate to tease the market with what may be the conclusions without providing facts. Remember that he is controlling regulation on some of the most important markets in the world.

The right balance is to conduct analysis and make careful observations about market behavior. After this analysis is completed, a careful set of alternatives have to be crafted so the identified problem can be solved without some unintended consequences. There is no question that the composition of players in the markets has changed, but that does not lead to the conclusion that they have created a market distortion.

Posted by Mark Rzepczynski at 2:48:00 PM No comments: Links to this post

The Obama Administration sent Geithner, Summers, Orszag and Bernanke to the Chinese talks in Washington to explain the current economic plan. The Chinese get better treatment than Congress, but then the Chinese are paying the bills. Of course, having everyone there makes sense, the creditor wants to talk with the team of the debtor.
"We sincerely hope the U.S. fiscal deficit will be reduced, year after year," Assistant Finance Minister Zhu Guangyao told reporters after the Monday talks had ended.
"The Chinese government is a responsible government and first and foremost our responsibility is the Chinese people, so of course we are concerned about the security of the Chinese assets," Zhu said, speaking through an interpreter.
Will this make a difference? The problem is the intangible. The confidence in bonds and a currency once the economic numbers are bad is determined by the belief that the debtor will change. The debtor has to swear that change will occur while convincing their voting public that there will be no costs or changes in service and benefits. Something will have to change but not today.

Posted by Mark Rzepczynski at 8:13:00 AM No comments: Links to this post