The Fed 2023 policy - What does this mean for asset allocation and market themes? Limited choices 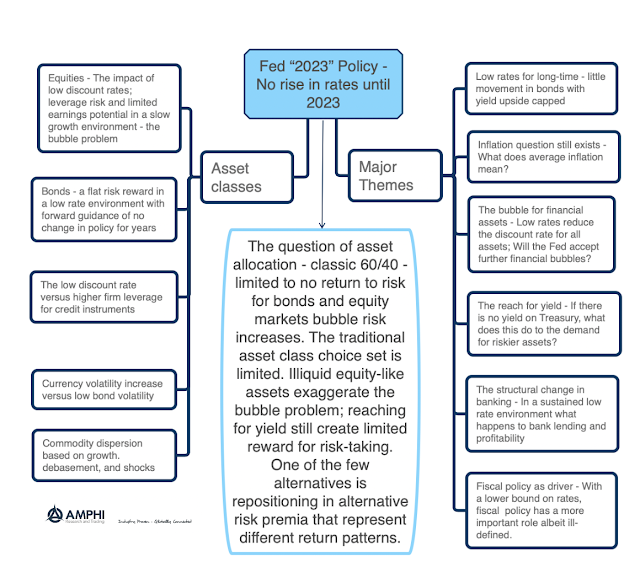 It is not a new or surprise policy but the Fed comments that low interest rates will likely be maintained through 2023 send a clear forward guidance message that clarifies that we are on dovish policy course. Although dissension is for an even more dovish forward guidance. Investors now have to adjust to this clarification and the choices are not overly attractive. Sure, continued Fed liquidity with the same level of Treasury and mortgage purchases provides support for risky asset purchases, but the law of unintended consequences suggests that too much of a good thing can lead to bad results.
The choice problem is simple. With Treasury pushed down to low levels for years, investors will not get any benefit from holding bonds. Equities will gain tailwinds from a low discount rate, but we are already at high valuations so these low rates will push markets further into bubble territory. Choose between rates pushed artificially low or invest with equities that are pushed artificially high. This is coupled with other themes of distortions or choices to undertake risks that forced upon investors because of traditional asset distortions.
Posted by Mark Rzepczynski at 5:15:00 PM No comments: 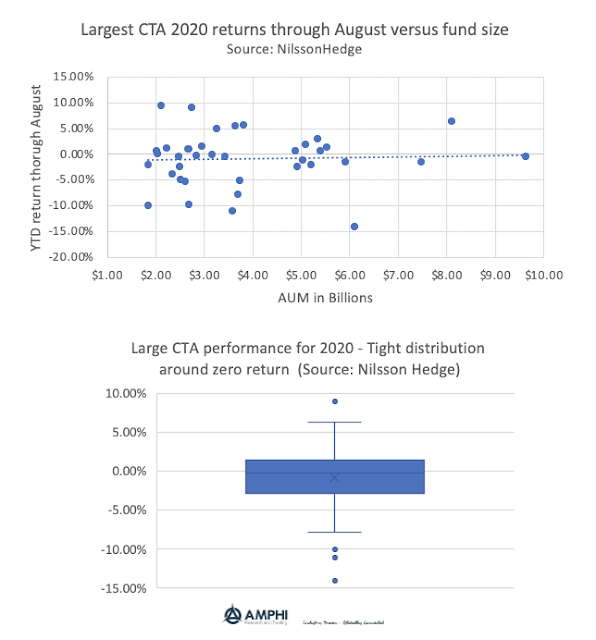 There has not been any crisis alpha within the CTA space for this crisis. CTA return performance suggests that there was no crisis and the actual gains in stocks and bonds do not show a crisis when looking at year to date numbers. The liquidity crisis of March seems like just a bad dream. A sustained decline in equity prices is needed over an extended time period translate into CTA crisis alpha performance.

A close look at the largest managers in the Nilsson Hedge database shows that there generally has not been any "crisis alpha" from these managers in 2020 as measured through the end of August. The average return for the set of large managers is -.88% with the 25th and 75th percentile respectively -2.48 and 1.25 percent. The size of the managers ranged between $9 and $1.85 billion in AUM and represents just over $148 billion in total investor capital. 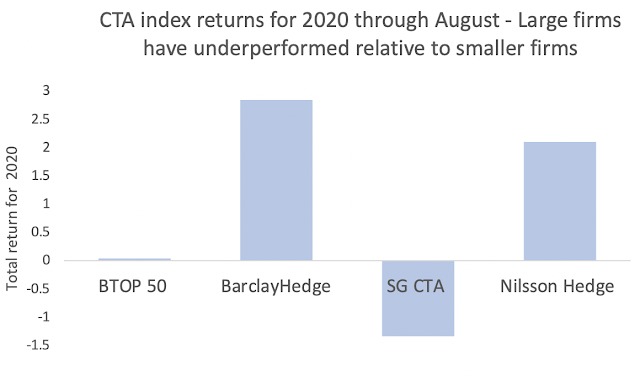 The major CTA performance indices are up just under one percent, but there is a noticeable difference between the large indices (BTOP50 and SG CTA) and the broader indices which include all managers. Large CTAs have not been nimble during this period. Simply put, all crises are not alike, and the largest managers may not have found a way to exploit sharp short-term shocks. 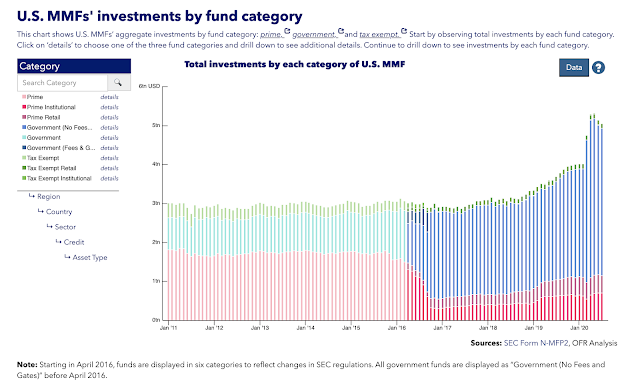 Money market government funds have grown in AUM this year, but the money market asset management business is again going through an existential threat from the Fed, as well as coping with the 2016 regulatory changes. The 2016 SEC changes created just two major money fund categories, government and prime that caused a major change in investor positioning. The March liquidity shock coupled with zero rates makes prime fund even less palatable to manage.
The money market fund managers have been in this position before but now managers are changing their business models. Vanguard, Fidelity, and Northern Trust are closing their prime (non-government) money funds. Fees cannot be charged on funds with such low interest rates without generating a negative return. The threat of variable NAVs is even greater when faced with large prime outflows seen earlier this year, limited liquidity in corporate short-term funding, and higher credit risks. Prime funds have come off their lows after the March outflow shocks, but the dollar inflows have not been near the increases in government funds. Prime fund AUM have not matched pre-2016 levels so this asset management sector is no long viable. 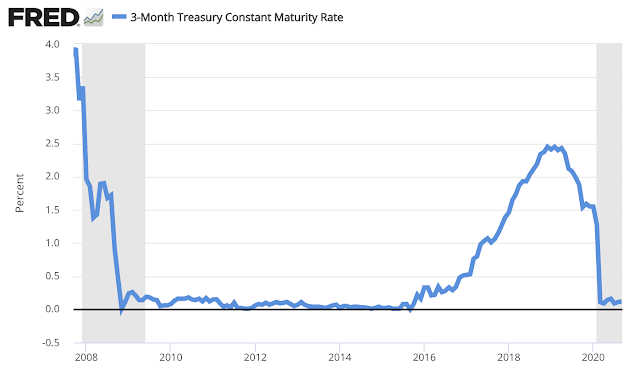 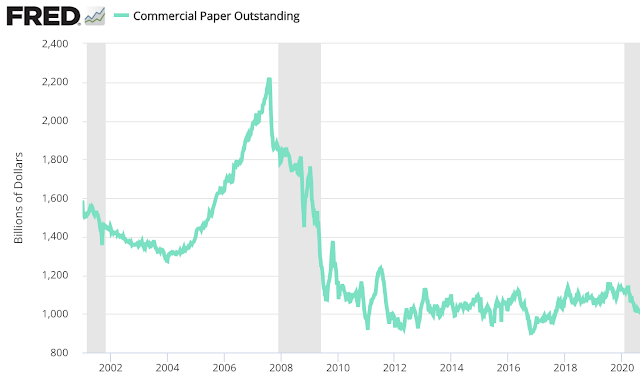 The impact of these large managers closing their prime funds cannot be understated. A major source of non-bank corporate financing will be closed and further harm the commercial paper and non-government money market.
The money fund and commercial paper shadow banking markets are just a shell of its former self, albeit the current spreads do not reflect this restructuring. Outstanding commercial paper has fallen and may reach the same lows as 2016. The Fed formed a commercial paper facility to help this market, but it was not extensively used and the blow-out in spread has made this a risky funding source as well as a risky investment. 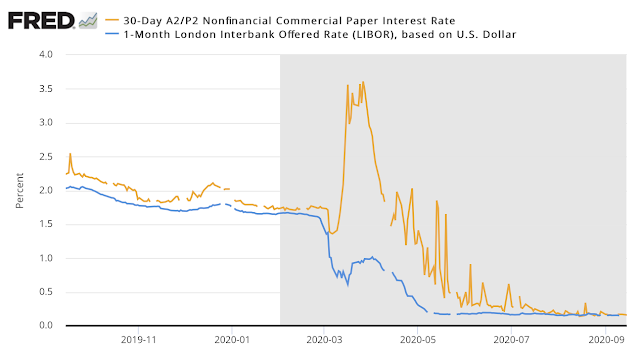 After a period of spread widening and high volatility, average commercial paper for A2/P2 borrowers are now on top of LIBOR, but that does not change the risk to borrowers who have to be concerned about the ability to roll-over debt. While corporate borrowers can take advantage of low rates further out the yield curve, the short-term funding market is facing a period of major restructuring.
Posted by Mark Rzepczynski at 4:55:00 PM No comments: 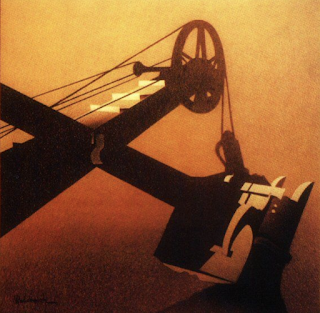 Alternative risk premia (ARP) have been shown to have unique return profiles from the market risk premium. Building diversified portfolios of style factors can provide an alternative return stream from traditional assets. The ARP are time varying and seem to have performance that is correlated to the business cycle. For example, the equity value premium will do especially well during an economic upturn or recovery. It is natural to then attempt to exploit these time varying returns to add value relative to a simple unconditional diversified portfolio.

The problem is not whether the conditional ARP returns change with the market environment, but whether investors can determine the regime being faced. If we can predict or forecast the market regime, we should be able to adjust the portfolio for improved efficiency. A simple solution is to employ forecasting advances such as nowcasting to help with regime identification. 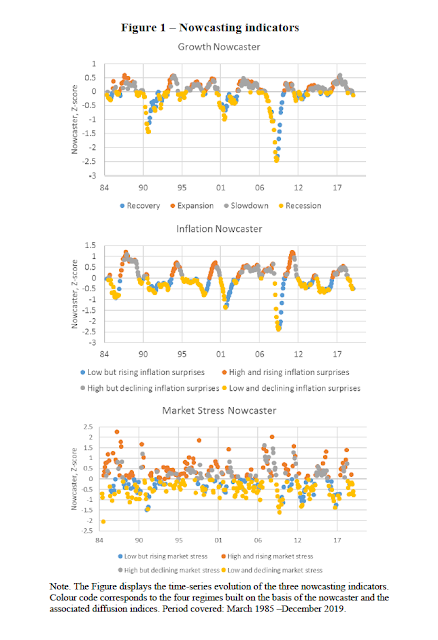 The nowcasting approach is atheoretical. It uses current data to generate a forecast of the growth, inflation and stress regime. The growth nowcast tells us whether we are in a recovery, expansion, slowdown, or recession. The inflation nowcast looks at the combination of a 2x2 between low/high and rising/falling inflation. The market stress nowcast using a similar 2X2 framework of level and change. These nowcasts are not traditional point forecasts but regime representations. 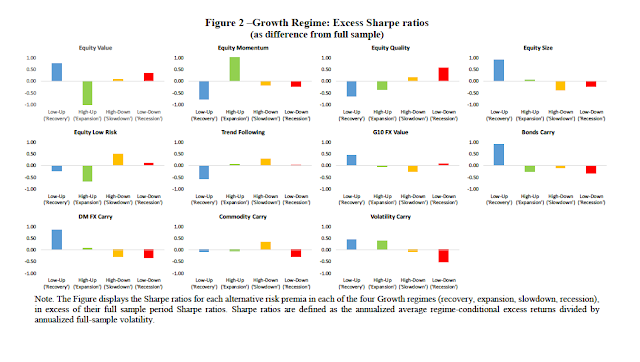 Using the regime frameworks, it is clear that ARP performance will change based on the growth regime. Conditional excess Sharpe ratios show the added value from the full sample. There is enough return variation for nowcasting to add value. 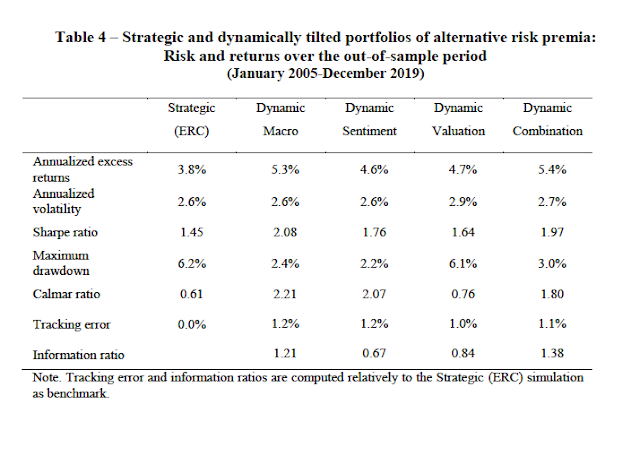 The authors look at five out of sample portfolios: a benchmark equal risk contribution (ERC) portfolio, a dynamic macro nowcast, a dynamic sentiment nowcast,  a dynamic valuation portfolio based on variation from average returns, and a dynamic combination portfolio. The dynamic portfolios all add value. Clearly, using some form of regime forecasts help with area ARP allocation decisions. The behavior of cross asset ARP is time varying with macro. sentiment, and valuation and can be exploited through nowcasts.