China financials should be the focus

There has been significant focus about what the Fed will or will not do in the next year, but the real issue or focus for investors should be on China financial markets. China has been in the previous role as the US, the marginal provider of global growth, so the news here is significant.

Let us not forget that China is a very controlled financial system. Rates just do not move because of the normal behavior of supply and demand. Well, generally this is the case. All financial systems are controlled, but if there is one place that government should be able to control credit markets, it is China. Now, it is harder than what we have seen in the past, but if there is a problem with financial system, the PBOC should be able to fix it. Unfortunately, keeping a lid on financial markets has a price. The government wanted to tighten credit to stop any financial bubble, but the effect was much greater than what was expected. There has not been a glide path. The problem is that bad loans have not be written down and poor credits have not be cut-off from funds.Now there is a day of reckoning and it is costly. This is one of the key problems with all financial crises, the eventual valuing of bad assets and the inability to pay for money borrowed.

Unfortunately, we are now finding out that there is a large credit crunch going on in the country and the shadow banking system has created a lot of leakage and the mechanism for potential damage. The off-balance sheet risks in the China market are like a huge iceberg for which there is not a good idea of size.Trying to cut credit for off-balance sheet financial products will not be easy.

The PBOC has extended more credit this week but interbank rates actually reached close to 30% last week. Rates are back down to 6.4% but were half this level in April. 90-day bill rates have increased from 4% to close to 6% also. This is supposed to be in a controlled economy. It can only happen if there a very large credit issues that the PBOC will not be able to easily solved without a major bail-out.

The Chinese stock market was in tatters on Monday so trying to tighten credit in this market may be a lot harder than what PBOC may have thought. So now we are in a special situation -there is no glide path but the world knows there is a problem.
Posted by Mark Rzepczynski at 8:35:00 AM No comments:

Email ThisBlogThis!Share to TwitterShare to FacebookShare to Pinterest
Labels: China

“As with most mature businesses, commodity hedge funds are finding profitability harder to come by. The sobering truth about the nature of commodity futures may have re-emerged: they are not investments at all but risk-shifting instruments, always generating a loss for every gain.”

Commodity prices are down and the expected inflation has not materialized around the world so there has been an exit from commodity hedge funds. The comment from the FAO suggests how unloved commodities are right now.


Unfortunately, the comments seem to be very off-centered and biased. Commodity markets, like all derivative markets, are a zero sum game with a winner and loser. They have always been a risk-transfer mechanism. The job of the speculator is to find where the hedging need is and take the other side for a profit. It may not always be described as such but providing an alternative to hedgers is one of the key purposes of these players. There has also been controversy about the type of risk premium in the commodity markets. Clearly, the risk-shifting in these markets creates a time varying premium which means that commodity hedge funds have to be dynamic in nature.

It has been a difficult market with large price declines in many markets,. macro RO/RO trading, and periods of strong volatility. This is the environment that hedge funds have had to work in and they have not done well. Beyond the obvious current performance issues we would be hard pressed to state that the reign of commodity hedge funds is over.
Posted by Mark Rzepczynski at 8:43:00 AM No comments:

Obama on Bernanke - the impact on financial markets

In an interview with talk show host Charlie Rose, Obama compared Bernanke to departing FBI Director Robert Mueller, saying, "He's already stayed a lot longer than he wanted or he was supposed to."

This had the expected effect of increasing the level of uncertainty in the financial markets. This makes Chairman Bernanke a lame duck waiting to be replaced. It is hard to think about the end to QE3 or cuts in bond purchases until we know who will be taking the place of Bernanke.

Can we tell the difference between luck and skill? This is not an easy task, yet it is critical for separating good from bad managers. The worst combinations for investment decisions are cases of the poor manager who gets lucky and the good manager who get unlucky. In both of these cases, there should be mean reversion in returns which will affect portfolio performance for the negative. Lets take the simple case if you make the wrong choices of managers. In the case of a poor manager who is lucky added to a portfolio, performance will suffer as the returns move back to the longer-term true mean. The mean reversion from the good luck will lead to future lower returns. In the case of a good manager who faces bad luck, there will be under performance in the portfolio because of exclusion. The bad luck will filter out what could be a good manager. The portfolio will not get the bounce back to the true mean.

One could argue that all market participants face good and bad luck so everyone is affected the same. Other will say that skill managers can have a better chance at making good luck which makes sense at a high level but in reality is a somewhat empty comment. However, it can be put differently by asking whether some markets are more prone to luck versus others. Or, are there strategies that can reduce the impact of luck?

We can go back and look at the fundamentals of active management. We can say that more trading can reduce the chance of luck driving returns. If there are more trades, there will be a greater sample of trading behavior. Les trading means that any one trade could be lucky. Chance will be reduced if there is more activity. Of course, there is a problem that effort and work can be confused.Still, looking at trade level behavior helps to answer the luck skill problem.
Posted by Mark Rzepczynski at 9:59:00 PM No comments:

Commodities in the long-run - more complex 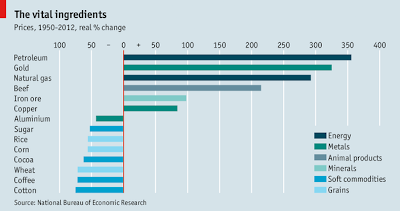 David Jacks of Simon Fraser University has done a very good job of collecting long-run price series in commodities to explain the behavior of real prices across the last century and a half. He made some interesting observations on the differences in real prices. Those commodities which are in the ground are more likely to see long-term real price gains.There is a finite amount of these resources and they are not renewable. Hence, there is likely to be greater increases in price. For those commodity markets which are grown or renewable, there is more likely to be controlled prices or real price decreases based on new technology and the fact that higher prices will lead to more planting. The table shows that energy markets have generally seen price gains. Agricultural prices have shown declines. There are also long cycle differences in demand, for example, the oil age. Agriculture has been affected by the green revolution of technology.

A look at the current drawdowns across many of the markets in the DJUBS index shows the significant diversity in these markets.The table below shows the markets in drawdown over the last year, two years and three years. We are looking at a set of 22 markets across metals, agriculture and energy sectors. First, currently just over 1/3 of all markets in the major index are in drawdowns of over 20%. For the two and three year period, the number of markets that are in a 20 percent drawdown are 2/3 rds of the total. Second there are some markets that have over 50% drawdowns over the last two and three years.

This commodity price behavior is in direct contrast with the equity markets which have shown strong gains over the last three year. commodity markets will follow longer-term cycles and show more mean reversion.  Agricultural markets can go through cycles based on longer-term planting behavior by farmers. If farm income is strong from high prices, there will be continued planting until prices have an impact on farm income levels which then change farmer behavior. In the case of metals, there is a long lead time with mine development. Hence, there will long cycles in these markets as new supply comes to market and forces prices lower. Metals markets will also be affected by the business cycle. Oil price seems to follow a different pattern given the control of oil by state companies and the strong surges in demand from the emerging markets. The energy sector cannot be viewed as a long-term storable commodity markets.

The drawdown analysis suggests that commodity markets have to be viewed as very independent and cannot be grouped together in the same way that is seen in other asset classes like equities or fixed income.