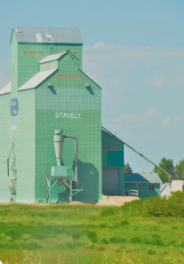 The BCOM commodity index is in a 15% drawdown from its high, but that does not tell the real story of price destruction for many individual commodity markets. The index is a basket of commodities with a weighting based on usage, production, and liquidity. It has a heavy energy weight and is structured to be tradable. It has been in a major up cycle for the last two years. See "Is the commodity super-cycle over or just a correction?"

A representative sample of commodity declines from 52-week high as of July 1 tells a messy story, (from @macroalf). Of course, the last two years have been one of the best bull markets in commodities since before the GFC.

Looking at the last few months tells a story of major repricing in commodities since the beginning of the Ukraine War. It is notable that oil and RBOB gasoline are both below the Ukraine War spikes in early March. The same applies to wheat where supply is blocked from moving out of the Black Sea. NYMEX natural gas is down over 35% since its high last month. 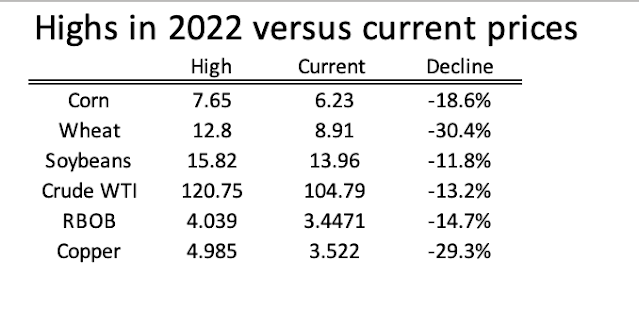 The commodity markets are signaling excess supply, a decline in global demand from recession fears. These prices are consistent with a transitory inflation story and not a sustained increase that will persist into 2023. These down price trends will be a function further economic slowdown; however, the current price falls look like a normalization after inflation and war extremes.

Posted by Mark Rzepczynski at 5:12:00 PM
Email ThisBlogThis!Share to TwitterShare to FacebookShare to Pinterest
Labels: commodities