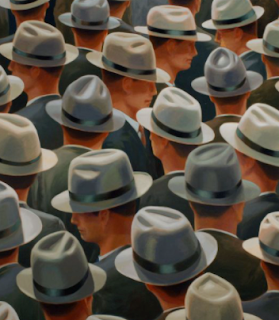 Many studies of group behavior shows that groups prone to risk behavior will take more risk after discussion within the group and those that are prone to caution will get more cautious after discussion. The group will reinforce their behavior in either direction if individuals have similar views going into a discussion. The crowd moves to extremes. This is called the "risky shift" effect or phenomenon.

There is strong meme concerning the madness of crowds and crowd behavior. History is replete with examples, yet less has been written about the crowd behavior moving to more conservative positions. Additionally, the crowd stories focus on group frenzy, yet the move to extremes can occur even in a hushed board room or the conference room of asset management firms where a small group may be assembled. The impact of this effect has really not been studied much within asset management groups.

The reasons for this phenomenon are varied. Some suggest it is associated with diffuse responsibility, more confident participants persuade others, and greater social status of following the group. An individual's risk sensitivity shifts within a group. This is group think in a risk dimension.

Forget the wisdom of crowds when everyone is thinking the same. Put the group in a room with no diversity and watch the feedback loop go to the extreme. The move to extremes is not just for the positive but also for the negative.

Quantitative models have an edge because they will not suffer from the risky shift effect. There will not be a move to risk extremes because the risk is programmed into position-taking. You will get exactly what you want, no more or no less.