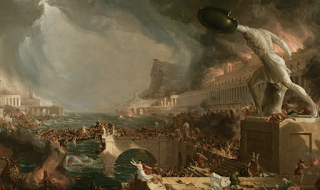 These financial vandals are not hoards of Wall Street traders, bankers, or pitchforked carrying savers. No, these vandals carry PhDs and talk in hushed tones in central bank corridors and legislative bodies. You won't see them doing any financial dirty work out in the streets. Instead, they will tell you that their policy vandalism is necessary to help people and the economy.

The policy of negative rates has an adverse impact on savers and retirees. Retirees who expected cash flow from higher yields have to rethink their portfolio structure as well as time to retirement. The expectation that savers will gain from a wealth effect and increase their demand to consume today versus tomorrow is offset with the view that more savings is necessary because real rates generate no gains. Negative rates will not help pension funds as these institutions are crippled under their new greater actuarial responsibilities.

Changes in payment terms and free money will not discipline debtors to behave more responsibly. This approach to finance is especially odd since the problem during the Financial Crisis was too much leverage and debt and not too little. Unfunded liabilities that cannot be met in the future because of low rates will not build financial confidence today. Policies can be used to nudge behavior to get the right solution, but global rates in negative territory have not moved growth higher. We are only left with the counterfactual argument that the global economy would be worse if rates were positive. The glut of global savings has yet to be solved through financial pain inflicted on savers.

The key investment problem of the decade; take on more risk or suffer from lower yields. The only way to break this problem is to think outside traditional asset management and focus on core factor risks. Reweighing factor exposures outside fixed income may offer some solutions to the current yield vandalism
Posted by Mark Rzepczynski at 5:01:00 AM