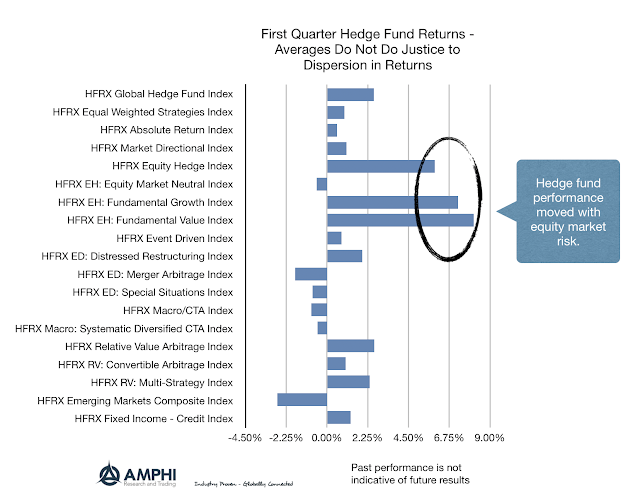 Hedge fund performance was dominated by the exposure to market risk as those fundamental equity funds that held more market risk dominated style performance. However, the average returns mask the large dispersion across styles. We still use indices for analysis because it does provide some information on what the average investor may expect. For example, while CTAs were down, on average, for the first quarter, anecdotal evidence from managers sending me reports show some up in the double digits for the first quarter. Winners made big money in the last quarter.

Call it luck or call it skill, the huge differences in performance were based on two key factors - one, long equity beta exposure going into the new year, and two, long fixed income exposure globally especially in March. Faster models made money. Discretionary traders who pounced on the changes in central bank thinking, or those who over-weighted fixed income were winners. If you got those two trades right, you made your year in three months. If you missed this or were late to the party, you are playing catch-up and having calls to explain performance to clients.

A dirty secret for hedge fund management is that investors don't want any hedges during big market up moves, they want performance. Underperformance during large market beta moves requires an explanation from managers.
Posted by Mark Rzepczynski at 5:41:00 PM