September Performance - Normalization After the Extremes of the Summer 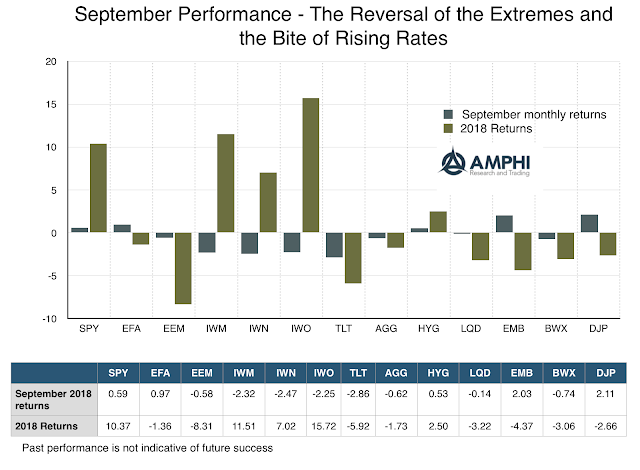 September represented a reversal of some return extremes in US markets. With growth, value, and small cap all down more than 2 percent and large caps gaining, some of the extremes in US equity markets this year started to close. Perhaps the continued rising rates are starting to be discounted in levered companies. Long-term Treasury returns were down over 2.50 percent for the month.

While long-term bonds declined, shorter-term credit assets were mixed. High yield was positive for the month, yet investment grade bonds continued their slide. EM bond returns were higher on the post crisis bounce after the upheavals in Turkey and Argentina. International bonds were helped by the dollar decline. Commodities were higher on further gains in crude oil.

As we move to the final quarter of 2018, our biggest concern is credit. With rates continuing to move higher, the effect of higher interest rates will start to impact debt financing, or simply put, there is a lot of debt that will have to be refinanced at higher levels in the coming year. Rising rates will have a direct impact on corporate income and will also affect consumer purchasing. Inflation is close to the magic 2 percent number and the economy is at full employment, so there is no reason to expect the Fed to change policy direction. The excesses of the last three quarters are unlikely to continue, so an earnings normalization should be expected which will be bad for stocks.

Email ThisBlogThis!Share to TwitterShare to FacebookShare to Pinterest
Labels: investments