The repricing of equity and fixed income risk in July 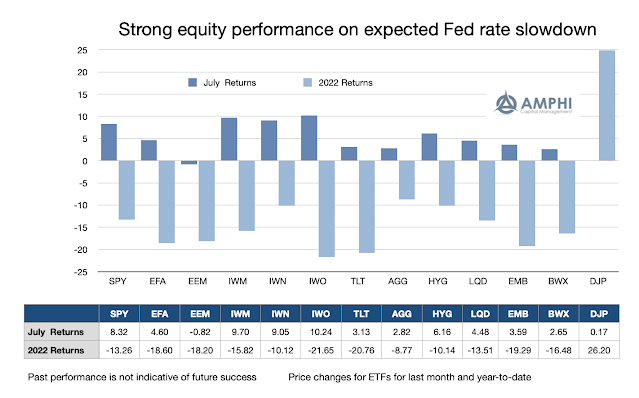 In June, we were looking at major declines in equity markets from a hawkish Fed raising interest rates 75 bps and perceived to be behind the policy curve. The fear was that the Fed would drive rate increases into a recession. In July, the Fed again raised interest rates 75 bps but provided enough signals to suggest it may be more flexible with policy. There is no forward guidance and decisions will be made meeting-to-meeting. There is enough wiggle with comments to suggest that the Fed path may not be as rigid as expected just a few weeks ago. This may not be what the Fed wants, but it is reaction from markets. Combined with the threat or existence of a recession (two negative GDP quarters), fixed income also showed a reversal from its deep drawdown.
Equities are still in a bear market. Fixed income markets are still a train wreck from a total return perspective, but there has been a significant repricing of risk. Will this continue? The next Fed meeting is in September, so we will not know for six weeks what the FOMC actions will be. There are two unemployment reports and a number of inflation signals before the next FOMC, so the guessing will begin. 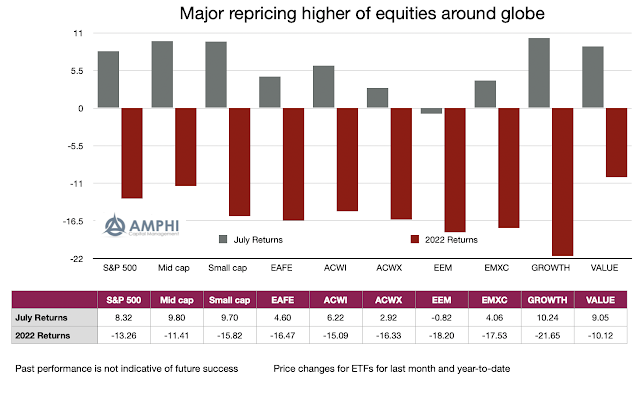 Posted by Mark Rzepczynski at 9:30:00 PM
Email ThisBlogThis!Share to TwitterShare to FacebookShare to Pinterest
Labels: investments