Less than six months ago, the market was buzzing with the information that the yield curve inverted. As we all know, when the curve inverts there will be a recession. The time between inversions and recession is variable, but it will happen. It is a lock. Unfortunately, there can be false positives or more precisely, changes in the likelihood of a recession. 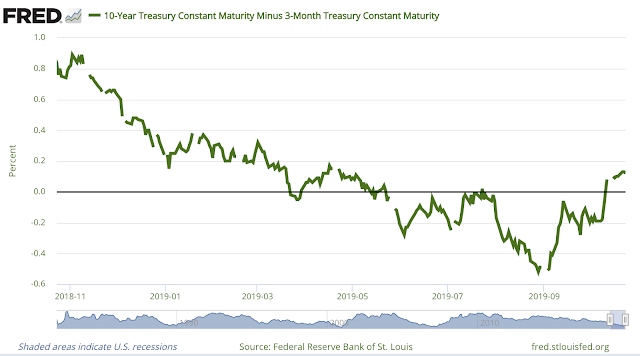 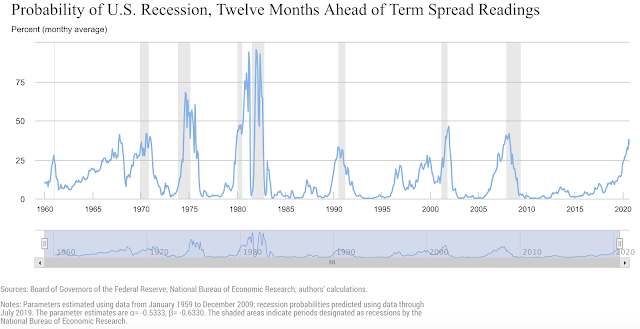 So, what do we do now? The curve has moved from inverted to being positive. This positive yield curve however is slight. The 3-month Treasury bill versus 10-year treasury bond yield is now positive 12 bps. The combination of Fed rates cuts and the announcement of Treasury bill buying to increase the Fed balance sheet is pushing rates lower. The Fed seems to be successfully offsetting fund tightness on the front-end of the curve, and some positive tariff news has pushed up yields on the long-end of the curve.

We can say is that the threat of a recession has been lowered. Most of the work on yield curve inversion and recessions has used logistic regressions to measure the probability of a recession event. The last reading from the New York Fed was slightly above 30 percent for September 2020, but that was with data from July. This likelihood measured while the curve was still inverted. That number will go down.

We are left with a measured response. The probability of a recession has declined. The Fed action and forward guidance has been enough to reduced the threat. Recession fears have diminished so holding a riskier portfolio is appropriate.
Posted by Mark Rzepczynski at 8:12:00 AM