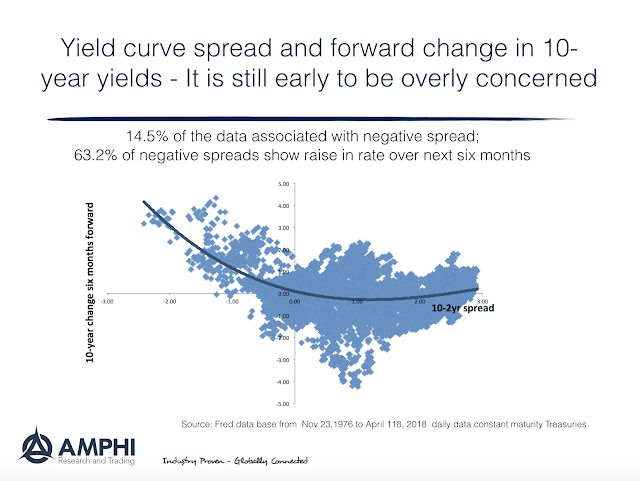 How much risk is there for fixed income investors if the yield curve is flat? I will break the problem into two parts.


If the curve is flat, investors are not receiving any yield compensation for holding longer duration, riskier, instruments. You can get the same yield with less risk by holding shorter maturity debt. As a no-forecast position, investors should not go out the yield curve.

However, we should also ask the question about what happens to future yield changes if there is a yield curve inversion. For the period November 1976 to April 2018, we compared the 10-year/2-year constant maturity speed against the change in 10-year yields over the future six months. Only 14.5% of the time period shows negative spreads. If we are in an inverted spread period, there is a 63% chance of a rate increase over the next six months. Of course, there is over a period when rates were generally falling. There is total return risk as rates rise during this period. Hence, investors should avoid duration risk during inverted yield curve periods. Periods of flat yield curve have a wider range for possible rate changes, but these flat periods do not have a bias to higher yields.
Posted by Mark Rzepczynski at 9:22:00 AM